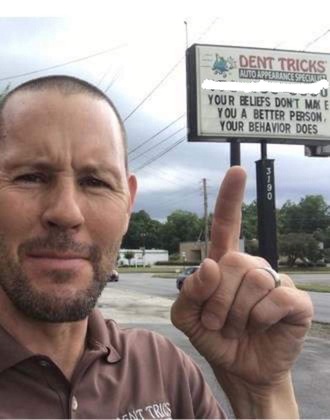 Hi! My name is Troy.

Left the franchise in 1998 after finishing 3 yr. employment contract.

Moved outside non-compete territory and started Dent Tricks in Sept. ‘98.

Attempted to expand into paint. After 8 months, bailed.

Attempted to expand into paint a second time. After 5 months, bailed.

Developed our own dent/ding service plan called Dent Assurance and installed in one luxury franchise dealer in 2009.

Hired an at-home receptionist/secretary/bookkeeper in 2009.

Third PDR tech moves in 2013 and we hire/train another PDR tech.

Split amicably with brother & nephew in 2016.

“Small Business of the Year”- Middle GA Chamber of Commerce (2011)

Examples of this Technician's Work

ARC is a not for profit organization based in the U.S. (Tennessee) and is open to all qualifying U.S. PDR technicians irrespective of affiliation or brand.

ARC certified uses visual confirmation over multiple transactions as a key component to the candidacy of our membership. Only expert and Master technicians will be recognized in the ARC programs.

The ARC membership will aim to maintain a minimum level of professional standards and workplace consistencies as applied to our fast growing trade.

ARC will remain an agenda free platform and simply serve our members openly and to the best of our abilities.

I am a PDR tech from northwest Ohio. I started out doing PDR at a b...
See Josh's Postcard

My name is Heath VanCamp I have been working in the auto body repai...
See Heath's Postcard

I am in car business for 18 years now. Started in pdr January 16th ...
See Igor's Postcard